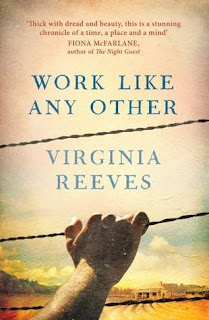 Work like any other tells the story of Roscoe T. Martin, an electrician by trade, but married to Marie,  a farmer's daughter. Roscoe is forced to make the most of what he has, and make farming - which he hates - work. He tries, but nothing cooperates, and everything is failing - the farm, his marriage and his life. Set in the 1920s, you can imagine the difficulties. Reverting to what he knows, Roscoe decides to run in an illegal line of electricity to help with the farming. And it works. Until it all goes horribly wrong.

This debut novel by Virginia Reeves has many things to recommend it.
An interesting cover, an originality that is refreshing, and a length that won't put you off- it is a mere 260 pages in paperback. What did put me off slightly was when it was chosen as part of the Booker Long List. That is usually enough to damn most books for me. However, I had already started this, and liked it, so I persevered. 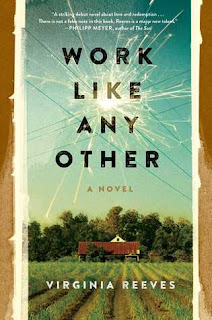 The writing is great - not a word wasted, making it difficult to believe this is her first. The anxiety is tangible, and the characters strong and brave, true to themselves. I loved the pacing - just enough to keep you interested, but not breathless - to take in the scenery and everything around you.

Despite my misgivings, I did enjoy this book. Not a huge page turner, but I devoured each word on each page, and found myself satisfied, replete.

As is the custom these days, there are at least two covers - mine looks like the top one, but I think both are great.