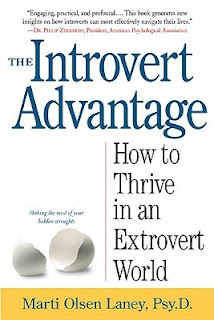 "How to thrive in an extrovert world" is the subtitle of this book. So clearly if you're picking it up to read, you're an introvert, right?

The first half of the books was quotable - facts and figures, anecdotes, and analysis of social situations that I could identify with. Being an introvert, you know.

But the second half was where it all fell to pieces a bit. a lot. First rule of writing - know your audience. In this case it's easy to know - at a wild guess a number of introverted types. or their loved ones, I'd say?

I was hoping for interesting observations on how the characteristics I'd perceived as weaknesses, and spent most of my life adapting to cope, or working around to minimize, or just blazing through to overcome, could be put to better use. Instead what I got was a series of "ideas" to "help me through awkward situations". They weren't even that good. It made me feel preached at, talked down to and "less than" the majority of the population.

So read the first half, and then STOP, for the love of life and the way you live it.

The mercy was it was short, and I was reading on my Kindle and at 83%, I was done, thanks to the extensive bibliography and index at the end. It also wasn't an expensive read, so I didn't feel ripped off. Maybe, since this was originally written in 2002, it could have a little rewrite? It could be that these ideas were novel 14 years ago, but we've moved on since then?