The President's Keepers By Jacques Pauw

Jacques Pauw's controversial book, The President's Keepers has taken SA by storm. Not leastly because free copies of the pdf have become readily available, and the debate rages as to whether the author wanted this - the dissemination of the information being in the public interest, after all - or whether, bearing the tragic state of literary purchases in SA in mind, everyone with a conscience (and a budget) should buy the book, to support local authors and publishers. But that really isn't the point, well not the whole one, anyway.

If you get your hands on a copy of this explosive, revealing, shocking, elaborate account, you should read it post haste. It is one of those books that if you leave too late, you will read it thinking - "But did I know that before the book was published, or has someone who read it told me?" Because the chapters in here will become part of our everyday conversations, the narrative of a country captured by more than a few bad men, and so they ought to. 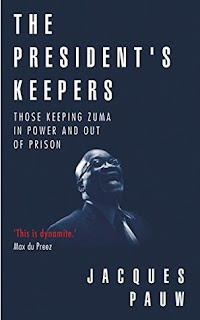 Jacques Pauw is eminently qualified to write this. He had been a journalist for a very long time, although now retired, and there are parts that leap off the page in their intensity and revelatory sense of conquest. It is long and detailed, and there are parts that were obviously rushed to be completed, and I think that's ok - explanation is often necessary for context, and there was a deadline, but more careful editing and rewriting could have shortened and improved this version.

Also interesting was the clear exposé of so many caught up in evil - from the use of funds from ill-gotten gains like cigarette smuggling, to the abuse of power in the form of awarding of tenders, and the tragic implications of the greed and grasping of those in power. It did seem that the perspective of the author was to judge every person whose name appeared in his records as good or evil, and I was even tempted to keep a list at one stage, because this is a text book of the sordid events that have unfolded since the corruption took root.

And that's the damning, hurtful truth. We all know. It has been there for a long time, and now it's been clearly exposed, sliced open with a surgeon's knife, so that we can all see the cancerous snake eating much more than its share, and taking a country way before its time.

As I write this, the impeachment of Bob Mugabe hasn't started, he's been offered a deal and resigned. There have been calls to do the same with Zuma. The problem is that this malignancy appropriates so many more than just one man, and I'm not sure that we South Africans have the courage or the moral compass to go after the whole thing, considering so many of us are sitting and reading pirated copies of the book.