Little Wrecks is, strictly speaking, not a genre I am allowed to read. By my offspring, that is. Don't roll your eyes at me, I'm serious. 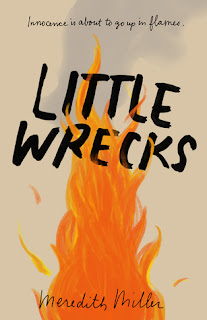 Whether it's because they think their books are so much better, that I'll stop reading what I love, and only read YA, or they don't like the thought of me reading the books they do, or heavens alive - imagine if I want to start a discussion about my latest discovery.

But this one is safe. It's not on any of their lists, neither has it appeared on our shared Kindle account, and I'd remember if I'd coughed up the cash for it.

Meredith Miller has created a real and memorable world for her three heroines. Ruth, Magda and Isabel live - just after the Vietnam war (so pre-technology) -  in a small town. Where everyone's biggest aspiration is to leave. Highbone, Long Island is too small for them. They aren't like everyone else.

Except that, in so many ways, they are. And the secrets and the lies that are buried and hidden threaten their plans, their friendship and their trust of each other.

“Darkly atmospheric and brutally honest, Little Wrecks depicts girls becoming women in a society that devalues both.”, wrote Mindy McGinnis, author of Female of the Species.

And that is its key strength. The prose was different, but not awful. The dialogues weren't great and the plot wasn't very original. But the whole book. Well it was honest and it does stand for something that I related to. And I liked that.

But girls, don't worry, your secrets are safe from me.

You may also enjoy The Wonder by Emma Donoghue or what about The Hate U Give by Angie Thomas?