The Memory of Water by J.T. Lawrence 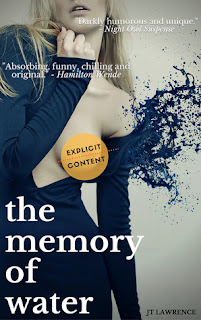 Slade Harris is an author who will do almost anything for a good story. The Memory of Water is told from Slade's viewpoint. He is, as the blurb says, stumbling through his late thirties hopeless and a little drunk. But then he has a dazzling, dangerous idea which will change his life forever.

I liked being inside Slade's head. Even though he wasn't a very nice person all the time. No one is. I also loved the plot, and the way that, even though this was set in SA, it was a story from anywhere in the world. It was really good.

A word of warning, though. This is COMPLETELY different to J.T. Lawrence's The Underachieving Ovary. The genre, style and content. There are warnings on all the versions I've seen (but, depending on your perspective, TUO may also need a trigger warning!) in case you dive right in after reading that other review, be warned - not for the sensitive.

J.T. certainly has a way of getting under a person's skin. In this case, the protagonist's and mine. She gets into Slade's skin to write his story and then beneath mine to scratch and squirm and generally creep me out. This was haunting, tense, edgy and more than a little melodramatic. I loved it. Fast-paced and out of the ordinary, you won't put it down.

On a personal note, I found the ending a little disappointing. Clever, but...now that would be telling, so I won't.