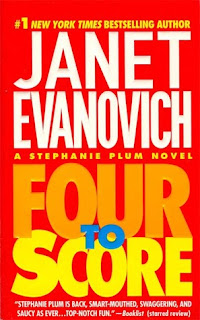 If you follow my reviews, you’ll know that I love Stephanie Plum. Janet Evanovich has written loads of these - 21, I think, or maybe even more. I decided after Two for the Dough to pace myself. Whilst thoroughly enjoyable, there is a formula. It kind of goes like this:

Stephanie Plum sets out to apprehend a criminal: not that surprising, she is a bounty hunter, after all, or find a drug dealer - they often skip bail, or in this case, kill her cousin - a little more surprising. In the process, she usually manages to get herself into all sorts of scrapes. She is taken aback when her various modes of transport are blown up. Delightfully shady and alternative characters appear. There is a run in with the law, and a romantic interlude with the dashing Joe Morelli, or another handsome male. Her family despairs of her ever leading a normal life, except her grandmother, who slips her guns, cash and general advice.

Told in a tongue-in-cheek style and at a racing pace, everything escalates until the conclusion - usually guessable, which is highly satisfying.

Here’s my favourite bit from Four to Score:

Fifteen minutes later I was dressed in four inch FMPs (short for "fuck--me pumps," because when you walked around in them you looked like Whorehouse Wonder Bitch). I shimmied into a low-cut black knit dress that was bought with the intent of losing five pounds, gunked up my eyes with a lot of black mascara and beefed up my cleavage by stuffing Nerf balls into my bra. Ranger was parked on Roebling, half a block from the funeral home. He didn't turn when I pulled in to the curb, but I saw his eyes on me in the rearview mirror. He was smiling when I slid in beside him. "Nice dress you're almost wearing. You ever think about changing professions?"

"Constantly. I'm thinking about it now."

Four to Score was endearing in that we saw more character development, a juicy plot, but otherwise the good old recipe worked well. Oh, and there are always lines you will want to read out loud to a patient spouse, or other loving member of your family, including your cat.

You will gasp, laugh out loud, smile and have a thoroughly entertaining time.

There is a movie, apparently, which I haven’t seen yet. I am a little nervous to, because I don’t know how it can match the wittiness of the writing, which is one of my favourite parts of the experience. What do you think? Have you seen the movie? Have you read any of the books? Which is better?

You may also enjoy Three to get Deadly.