Daisy in Chains by Sharon Bolton 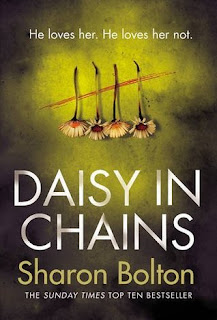 It had to be done. I had to drop everything and read. This book. I received an advance copy, in ebook format. But my iPad needed repairs, and so I had to finish reading on my phone. What? No, of course I couldn't wait the 24 hours it took to fix my screen to finish the book. It doesn't work like that with Sharon Bolton.

It was gripping, intense. Little Black Lies last year was a favourite, and I suspect this is a contender for my 2016 book of the year. If you're going to read either of them, I strongly suggest that you don't read the blurb, or anything on the cover or the back of the book. In both books, within chapter one, I had had a surprise of the most delightful kind, but only because I chose not to read anything in advance. It's becoming a trademark of Sharon's books for me, and it is quite enchanting - to be drawn in with a surprise and a hook that won't let go.

The hook in this case is the fact that there is a gorgeous serial killer in jail, and, it appears, many women in love with him. But not Maggie Rose, a reclusive author and lawyer. She is impervious to his charms. Or is she? And so the game of cat and mouse begins. Is he innocent, as he protests? Enter Detective Pete Weston, the man responsible for putting Hamish Wolfe behind bars. Is he helping Maggie to uncover the truth, or protecting his own little dirty secrets?

And now you may have an inkling of why I had to finish the book, no stopping. The sinister setting - from prison to meetings of "supporters of Hamish" in strange secretive places; the lurking strangers in the darkness, the unexpected twists and turns around every corner and down each dark alley. Sleep wasn't going to happen until all was solved and the baddies put away forever.

Sharon doesn't shy away from examining how women fall for monsters - guilty or innocent. Neither does she spare readers from the violence and pain experienced by prisoners, nor the unforgivable "fun" that boys have with overweight girls. It's an unforgettable book. I'm going to have to reread it when it's out in paperback. It's that good.

At time of writing, the hardcover was released, as was the Kindle edition. Both were quite pricey. Read Little Black Lies in the meantime.

Thanks to Netgalley and the publishers for an ARC, which in no way influenced my opinion of the book.