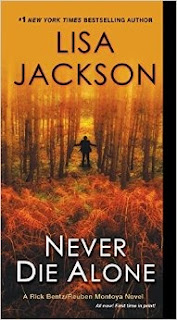 Twins disappear just before their 21st birthday. Is someone taking them and murdering them? Who, and why? Someone has been arrested for two of these murders, but suspicion arises about whether he was actually guilty. If not, is the real killer still on the loose? And with him locked up in jail, Zoe and Chloe (almost 21) go missing.

This is a romantic suspense novel. I don’t read much of these, and this is a good example of why not.

The book is #8 in a series. It felt like the detectives (presumably key to the first seven novels) were completely superfluous. The mystery could have been solved without introducing them as characters. There were far too many characters.
The first 70% of the book was very slow. And not being held by the story, I had time to think of all the reasons I didn’t like the book – the names of the many twins were just corny. Not even cute. The writing style was condescending – a number of facts were repeated, as if the author had to make sure we got them. So the experience was in all, quite disappointing.

I think that there are better examples of good writing in this genre. Authors like Andrea Kane and even Tess Gerritsen’s first few books.

This book had a lot of potential, and I suspect others in the series may be better. It wasn’t all bad, but could have been so much better.