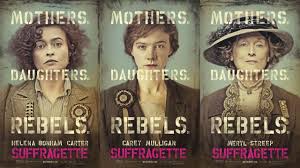 "Well, that does it. I officially hate men. All of them."
"Me too. In fact, I am not speaking to another one for at least a week."

This was the conversation my husband and I couldn't help but overhear as we left the screening of Suffragette. I glanced at him, and his look said, "Keep walking." I wanted to turn around and say "Not all of them," but perhaps it was better that I didn't. The movie had marked me under my skin. So much so that I returned to see it the very next night with my teenage daughter.

What was it about the movie that really got to me? A number of things.

Firstly, the fact that very little has been written and therefore screened about this horrific, embarrassing and important part of our international history and heritage.
I have encountered some snippets in the historical fiction I read, but apart from that, almost nothing.  Maybe it's my fault, or maybe it's been the case that for too long we've let men write our history for us. Time for change? I think so.

And this movie was so well done. One of the reasons was that it worked was it didn't try to be too big, or too much. It took the story of a woman, Maud, who was relatively ok with her lot in life, until she was asked what the vote for women would mean for her. And she was asked this by Lloyd George, in front of educated, superior, well-dressed males in Parliament. To which she honestly responded. "I don't know. I never fought we could win the vote." But then she did - start thinking - that is. And as they say in the classics, that's when the trouble started.

Ok, before I rant about some other things that got to me, here is the highlight of the movie for me - from about 1 minute into this clip. It's Maud, speaking to the policeman type of dude. He's just trying to apply the law, but it isn't helping anyone.


The women encounter opposition from all sides. Even the men who don't really object to them getting the vote. The honest citizens, as it were. The ones who weren't spending the wife's hard-earned cash on booze, and beating them up. They were "encouraged" by society to control these women - to stop them being so "rebellious". These women were not only campaigning for the vote, more importantly, the right to change the law - the one that had been drawn up by these very same men, the one that gave them no rights over the very children they were given the lion's share of the responsibility of raising. Ironic, no?

And of course, lest we forget, the irony of men saying that women cannot do "labour". Yip, really - how did you enter the world, mister?

I'm nearly done, but it wasn't lost on me that men must have been truly threatened by these women, when they started their hunger strikes. The men were terrified that a woman would die, and thereby become a martyr for the cause (God forbid that the cause got a martyr, never mind that the cause would have lost a valued human life!) - the women imprisoned were force-fed in barbaric and subhuman conditions. The result was often that they became more ill because of the force feeding, and this practice was eventually stopped.

Last point. One of the most important things that these women fought for was the right to equal pay for men and women. I don't know about you, but my strong sense about where I work is that this is not the case, despite it being against the law to discriminate on the grounds of gender.

The vote was won at different times in different countries for women, and even later for people of colour. Women received equal rights over their children in 1925. Yet I'm not sure that the equal pay for men and women has been won. How long will it take? And what will it take? One thing I know, we shouldn't stop fighting for it. Not only for women, but for minorities too. Too much has been sacrificed already for this generation to give up on this fight. 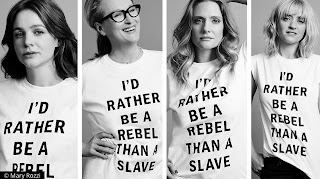