If #Zumamustfall, who should rise?

Since reviewing one of the best books I have read in a while, A Casualty of Grace, by Lisa Brown, the following quote has been running through my head with different emphases, and applications:

“It is not enough to do good; one must do it in the right way”

Lisa Brown uses the quote - attributed to John Morley - to open her beautiful book about the plight of British orphans, shipped off to Canada in the late 1800s and early 1900s. In the context of all going on in my life and country at the moment, the quote seems to have some resonance. 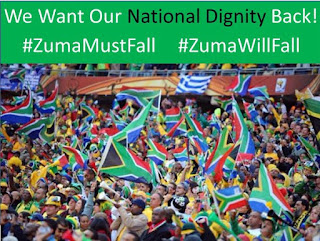 South Africa is not at its proudest moment as a nation. Although our history too is filled with long and shameful abominations, never before have we felt that it could all be changed by the removal of a single person, who seems to be most responsible for all our current embarrassment. Hence the cries for Zuma to fall.

It has struck me though, that it would be a crying shame for his fall to take down the ANC, a political organization that despite being born in the worst of times, had the noblest of aspirations and leaders that inspired change and were revolutionaries and visionaries of the best kind. How awful if Zuma's fall brought the heritage that is not only Madiba's, Tambo's and Luthuli's, but that of all the people who fought so hard and sacrificed so much into the same disrepute. 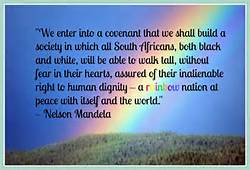 And the current demolition track our rollercoaster little nation is hurtling on is sad, because South Africa, despite its shame, is also filled with miracles. The 1994 first peaceful democratic vote is one such event, and there are many others. As a nation, we seem to find hope when there is none. In the midst of corruption, injustice, poor governance, nepotism and a lack of leadership, our dreams of being the peaceful, free and fair Rainbow Nation are not dead. They remain.

My wish is that Zuma would go, called out for his misdeeds by the ANC, and with him, the notion that it is all right for politicians and all those in power to be corrupt and greedy and demonstrate favouritism. My prayer is that the ANC would rise, fueled by the passion that inspired its former leaders, holding its original ideals at heart, for the good of all. Here's some history from Wikipedia.


'In 1955, the ANC sent out 50,000 volunteers into townships and the countryside to collect "freedom demands" from the people of South Africa. This system was designed to give all South Africans equal rights. Demands such as "Land to be given to all landless people", "Living wages and shorter hours of work", "Free and compulsory education, irrespective of colour, race or nationality" were synthesized into the final document by ANC leaders...'

To go back to Morley - the man who talked about doing good in the right way,  I found some other profound things he said...Here are just two more.

"Those who would treat politics and morality apart will never understand the one or the other."

"In my creed, waste of public money is like the sin against the Holy Ghost."

I realize that this is a big dream of mine. It was a long and difficult fight before, even though it is easy to see that what was happening in 1955 in our country was wrong. It is more difficult to root out the evil that comes from within. It requires self-examination, and arguably more courage to face. But then, I do believe in miracles.