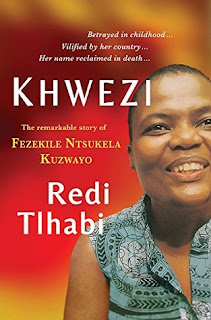 Fezekile Ntsukela Kuzwayo – better known as Khwezi – is the woman who had to flee South Africa after her accused rapist, Jacob Zuma, was acquitted of her rape in 2006.

She died a decade later.

“My family died fighting for this freedom and the movement does not really care about widows and orphans.”

The movement Fezekile is speaking of is the ANC. It saddens me that Fezekile experienced such tragedies -her father's death when she was nine, three incidents of sexual assault and as a teenage girl, the rape by her 'uncle' Zuma.

She inspired me by the actions that she took -  she challenged the man, the party, the country that made him president - which is to our shame. This was met with angry protests against her from Zuma's supporters, questions about consent, a society and media that questioned her honesty and ultimately a finding that confirmed there is no justice available for the poor and the oppressed.

Redi Thlabi writes about Fezekile's life with raw honesty, passion  and a clarity that rings like a bell through the dusty, murky chaos that has become our dirty patriarchal heritage in this country.

This story, post her death, could become her redemption, or at least a part of it, if it can motivate people like you and me to stand up against those who try to do such things again.

You may also enjoy Brutal Legacy by Tracy Going or Endings and Beginnings by Redi Thlabi.