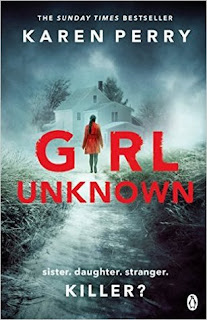 When first-year student Zoë Barry walks into Professor David Connolly's office and tentatively says these words, he is left reeling. But it is the lives of his family - particularly his wife Caroline - which are turned upside down by the arrival of this stranger.
A daughter, a sister, a friend . . . an enemy?
Though no one knows quite who Zoë is, she is soon entangled in their lives. Yet her stories don't ring true and Caroline is determined to learn if the girl is the unlucky innocent she claims to be or someone with a far darker agenda.

A deadly cuckoo in the nest . . .Because by letting Zoë in, David and Caroline aren't just leaving themselves vulnerable. They're risking the most precious thing in the world - the lives of their children .

Karen Perry is the pen name of Dublin-based authors Paul Perry and Karen Gillece. Both have written other books, and received some acclaim for their work.

I started this book not knowing much of the above - I hardly ever read blurbs, and I didn't know much about the authors. It moved nicely and the writing style was pleasant. But as the plot unfolded, I started feeling irritated. It was just not working for me. The characters seemed contrived - even a little unnatural. They were interesting, but there wasn't enough background on Zoë. David was also annoying. Although he was the victim, I kept feeling he was getting exactly what he deserved. And then I felt guilty about that. Caroline could've been stronger, more deceptive. I kept reading, hoping the story would resolve and all would be redeemed.

But that ending. It was so bad. So very bad bad bad. There was no redemption. And it looked so promising.