I get knocked down...


I remember the first time. It was a cold morning. We were blowing on our cold hands, rubbing them together as we started our run from school.

Anyone ever run a gauntlet? For those of you who haven’t, here are a few examples: Warning – you may need to use some imagination…


Gauntlet  #1: Negotiating a very long queue at Woollies with a toddler (or two) in tow. Make that a hungry toddler who eyes all the brightly coloured, attractively packaged sweets/chocolates and other unhealthy choices. And you have maxed your credit card. And you have just enough cash for the bread and milk you have to get.

Gauntlet #2: Imagine you are a small edible fish. You have to swim against the current to get to your food source. Not only that, the shadows of sharks and other hungry predatory fish are looming. How fast will you swim?

Gauntlet #3: You are playing a game of touch rugby with a group of people much bigger, stronger and faster than you. You catch the ball, but there is no one else to pass it to. You have to make a dash for the try line. There are only 4 huge boys who are defending. You run like hell. 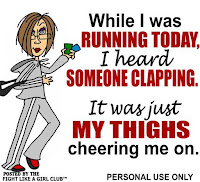 So our version of the gauntlet on this fine wintry morning is the fact that we are in our running gear – you know – tight leggings, figure hugging lycra, caps hiding bed hair.
Facing a stream of well-dressed parents in (mostly) four by fours (higher so they have a great view). We can only see them through tinted windows from the side. And hope they don’t knock us over as we leave the school gate, trying to jog. We are not great joggers, so actually we are trying to look like we can jog. Every other morning, someone leans out of a tinted window and screams “Hey girls - have a lovely walk.” To which we call out – “Hello - we are running.” Knowing that this is not obvious from our (lack of) speed, or our general appearance. By which time they have disappeared into the school gates. And we know they haven’t heard us, because two days later, they still refer to our “walks in the morning.”

So we make it through this gauntlet today, and are trying to catch our breath – not from the physical exhaustion (good Lord, we haven’t even been “running” for 2 minutes yet), but from the heart pumping with adrenalin from the gauntlet.

It's then that my long-legged friend leaps like a gazelle over something on the pavement that we haven’t noticed. If you’ve read any of my other blogs, or know me at all, I am not considered long legged. And I NEVER look like a gazelle when leaping. In fact I doubt I can leap. At best I can kind of bounce. “Careful, ” Grace the Gazelle advises – her general caution to me every 10 minutes while we run. (I am the more accident prone of the running buddies.)

My heart resumes its pumping. I stretch my stumpy legs as far as I can in my attempt to clear the pile that looks like something wrapped in newspaper. I picture a long jump sand pit in my mind, and imagine that with the tiny powers of my brain fully extended, I can land far, far into the middle of the pit – or in this case – clear the obstacle. You are probably imagining a cartoon character who runs over the edge of a cliff and keeps air-running to try to increase the distance, or stop the fall. Well now you are, I suppose, if you weren’t before. This is not far from the truth either. Anyway, surprisingly, I made it. My feet touched solid ground and I exhaled.

And missed the flipping stick! Clearly, having now used up all my spare adrenalin sources, I had nothing left with which to negotiate a fairly small (30 cm ruler-like in length but not very thick) stick. I went sprawling, diving hand-first into the cobbly, gravel covered pavement, and impaling a sharp piece of grit into the palm of my hand.

And if you think that is the high point of the drama in this story, honey you aint seen nothin yet. In my not-so-graceful bounce, I managed to observe what Grace the Gazelle missed. The pile on the pavement that looked like it was wrapped in newspaper, was a body. A human BODY. And the body was alive, because now, suspecting that my sprawl would collide with his universe, he jumped up. At this point, I found enough adrenalin to gasp. As did Grace.

What, I ask you, does correct social etiquette suggest you do now? Apologise? Greet the person? We didn’t really care.
And in case you think I am being melodramatic, I landed up at a day clinic. The doctor had to take the small stalagmite out of my hand, and stitch it up. I still have a small scar.

What have I learned from the experience? Not much. I still fall. Often. But Grace helps, and I always get up again. Oh, and now we walk the gauntlet.

And here is the index of all The Running Rants

Ha ha, I clearly missed out on this experience but can recall a few others. Perhaps Marina and I should write a guest blog - 'Watching you dive'.

Write it, Wayne. Write it. It will be very funny.