Reducing the Sodium - Read the labels 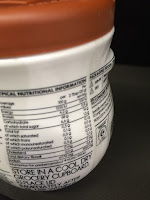 My previous food blog explains that we eat too much salt, and how much is enough.

So, what do we do about it? Well, there are some foods that are just way too high in sodium, and we should just never eat. Ever. This goes for anything processed, packaged, and any stock powders, soup powders, pasta mixes, etc. Check out the sodium content on the left - it is standard beef stock from Woollies.


That is a massive 6770mg per 100g of sodium. Remember, we are targeting 100mg per 100g. So it is 67 times too much. Granted, you are not going to add 100g of stock powder to your stew. You are going to add 20mg (the serving size), and that has 1354mg of sodium. If you eat a sixth of the stew, that is 225mg, but still. That’s more than half of your meal allowance if you are trying to cut back to 1300mg per day. And that's just the sauce. There is more sodium in the meat, vegetables and other sides. I’d rather have little to no sodium in my stock powder, so that I can have a tiny bit on the potatoes, thank you. The good news is that you can get low sodium versions, or make your own. Far better.

Sadly, also anything baked has a high sodium content. This is because of the baking soda or baking powder (before you even add any salt). There are 150 milligrams of sodium in 1/8 teaspoon of baking soda, which has the same effect as ½ a teaspoon of baking powder. That’s not so bad if you only use a teaspoon (300mg), no salt and bake a whole batch of biscuits, of which you have one or two. But it is also sodium I can do without.

The good news (yes there is some) is that not everything that tastes good is filled with sodium. In fact, when I started discussing recipes with health shops, it was interesting to discover that this is a bit of a chicken and egg situation. Salt was added and we all got addicted to it. Now when food manufacturers try to remove the salt, we miss it, and choose stuff with more salt. (Because of all the salt, more sugar is added, which is another story, and another of our many addictions. But that will be told on another day.) In SA, there are new regulations which insist that food is correctly labelled, as well as a maximum sodium content for a lot of foods. All good.

In my journey to a lower sodium life, I initially replaced all the salt and stocks with low sodium versions. It was expensive, but (I thought) worth it. I bought Mrs Dash seasonings (sodium free), Lo Salt (which has one third of the sodium) and potassium as salt replacements. However, I have since discovered that once I broke the addiction, the food tasted much better with no salt and no replacements. And I started adding spices. They were delicious. And spice does not equal salt (if you stick to the pure versions). So now, it’s quite simple. I use these seasonings most often – Herbs (I use a mix from Provence which is divine, in everything), a little black pepper, lemon juice and garlic (sometimes). Nutmeg and cinnamon for butternut and pumpkin, rosemary and chives and thyme for potatoes, and roast chicken. And so on.

And it wasn’t long before I discovered this amazing recipe for Lamb Korma. It is delicious. The recipe uses a slow cooker. But if you don’t want to do that, you can do this on low on your stove – just reduce the time. It’s got loads of spices. But it isn't too hot - I gave it the husband test (he hates burny). It passed. And if you can’t find all those spices, that’s fine. Leave some out. But an investment in the spices is worth it – you will use them again.

So here it is Fragrant Lamb Korma – no salt. Perfect for winter.


You may also enjoy My Food Journey - how it all started, or Reducing the salt - part 1 which has a link to Homemade burgers. Or try Reducing salt- the exceptionistas.