The Craftsman by Sharon Bolton 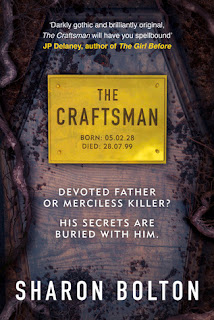 It's a brave move when an award-winning author changes direction in the writing of her novels. We're quite a fussy bunch, that way - not too much the same - it becomes formulaic, and not too different - you will lose your audience. You can imagine the discussions with the publishers.

And that's exactly why Sharon Bolton changed publishers to write this one. She grew up in Lancashire, was raised on the legend of the Pendle witch trials. (Sheds some light on how she's able to make all her novels so dark and twisty.) According to the  Pendle Witch website (that's a few hours of your morning gone now!)  [the witches] were executed at Lancaster on the 20th of August, 1612, for having bewitched to death 'by devilish practices and hellish means' no fewer than sixteen inhabitants of the Forest of Pendle.

But what else is this about? Well, Florence Lovelady, in 1999, together with 15 year old Ben, her son, returns to Sabden for the funeral of Larry Glassbrook, a man she helped convict 30 years ago, when she was a young detective and he confessed to burying children alive - he was the undertaker after all - together with clay effigies. Told in both Florence's revisiting of the places she detected in the 1960s, and her memories (sometimes dual timelines annoy - but here they flow together like tributaries of a river), we meet the local DC Tom Devins, the sexton, Dwane, Larry's wife and children, and Avril and Daphne, who run the local coven.

Evidenced by an average rating of 4.23 stars on Goodreads, and countless reviews saying 'I don't read witchy stuff, but I'd read anything Sharon Bolton writes', this is already a resounding success. I agree. It's creepy and menacing, the stakes are stupendous, and added to the voices of the ghosts that cry out for justice from the graves, is the young Florence (Flossie) in a tough world where women's voices are never heard, trying to do a great job despite the prejudice and sexism rife in the force.

In a word, this is brave.

It worked for me. If you 'don't read witches', you may want to start with this one. She doesn't write witches either, but hell, she can.

You may also enjoy Sharon's first novel, Sacrifice, or Dead Scared, or what about Little Black Lies, Daisy in Chains, or Dead Woman Walking?