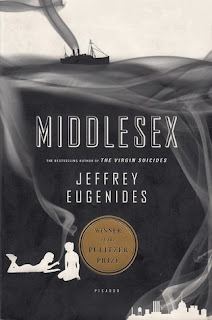 When someone asked me if I'd read this book, I'd always say "yes, the classic", and that would be the end of it.

So it went until a particularly astute friend asked me, and when I responded as usual, she looked into my eyes and said - "You're thinking of Middlemarch (by George Eliot), aren't you? You haven't read this." She then found one in a second hand book store and bought it for me.

I was and I'm glad she persisted. When we start talking about Middlesex, we always manage to lose most of the audience quite quickly, so I'll start by saying it was one of Oprah's recommended books in 2007. And it won a Pulitzer.

It reads like an intergenerational memoir, starting with the narrator - Calliope Stephanides' grandparents. They experience the Great Fire of Smyrna in Asia Minor, the destruction of their village, and travel across the ocean to the United States. They settle, struggle, and the history of immigration and racism as seen from Detroit is deftly woven into the tale.

The story also very cleverly examines sexuality and our attitudes to it, through the eyes of a hermaphrodite. This is the part of the conversation that people shut down in, and I think I know why - it's not always easy having your ideas challenged by a fictional character. But Middlesex is so well written, and you get to know the characters so intimately, that it happens quite subversively, which is the point, I suppose.

Here are some quotes I found profound.

“Emotions, in my experience, aren't covered by single words. I don't believe in "sadness," "joy," or "regret." Maybe the best proof that the language is patriarchal is that it oversimplifies feeling. I'd like to have at my disposal complicated hybrid emotions, Germanic train-car constructions like, say, "the happiness that attends disaster." Or: "the disappointment of sleeping with one's fantasy." I'd like to show how "intimations of mortality brought on by aging family members" connects with "the hatred of mirrors that begins in middle age." I'd like to have a word for "the sadness inspired by failing restaurants" as well as for "the excitement of getting a room with a minibar." I've never had the right words to describe my life, and now that I've entered my story, I need them more than ever. ”

“I was thinking how amazing it was that the world contained so many lives. Out in these streets people were embroiled in a thousand different matters, money problems, love problems, school problems. People were falling in love, getting married, going to drug rehab, learning how to ice-skate, getting bifocals, studying for exams, trying on clothes, getting their hair-cut and getting born. And in some houses people were getting old and sick and were dying, leaving others to grieve. It was happening all the time, unnoticed, and it was the thing that really mattered.”

“But maybe they understood more about life than I did. From an early age they knew what little value the world placed in books, and so didn't waste their time with them. Whereas I, even now, persist in believing that these black marks on white paper bear the greatest significance, that if I keep writing, I might be able to catch the rainbow of consciousness in a jar.”

“The television replaced the sound of conversation that was missing from my grandparents' lives.”

If you haven't read this, it's well worth putting on your list for "to look out for" in a second hand book store.

You may also enjoy The Nix by Nathan Hill.