The President is Missing by James Patterson and Bill Clinton 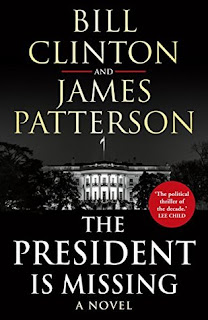 President Bill Clinton partners with No. 1 bestselling author James Patterson in a powerful, one-of-a-kind thriller filled with the kind of insider details that only a President can know.

I wish I'd read the blurb before I started the book. But I don't, so I didn't. And seriously, I think the attractive sentence here is that one - don't you agree that most U.S. inhabitants wish they could say that their sitting U.S. President had gone AWOL. I wonder how many pray for it?

Anyhoo, you can rest assured that - as with most blurbs, actually (and in this case, the title too) - that is not even the point of this. Neither do you feel that Bill Clinton has given any major insight into life at the White House, Camp David, Mar-a-Largo or any of the famous gathering-in-crisis spots of the President. As Goodreads reviewer Ron Charles penned...

"The CIA can relax. Surely, no black felt-tip pens went dry redacting classified material from this manuscript. “The President Is Missing” reveals as many secrets about the U.S. government as “The Pink Panther” reveals about the French government. And yet it provides plenty of insight on the former president’s ego."

As we know, any James Patterson novel written over the last few years, is not actually written by James Patterson, including this one. So one must assume that Mr. Patterson's ghost-writer consulted Mr. Clinton extensively. About what remains the mystery.

But back to my point - this is a story about the President and the U.S. being under attack, about a traitor in the inner circle, about cyber terrorism and the President's enemies and rivals - seeing an opportunity - circling the blood in the water. Not about a Missing President. I'd love to trash the flimsy plot - I have serious concerns about so many aspects of the hacking and computer part, or to call out the preponderance of CIA/FBI/ex-military types - all male, white and so clichéd, or to be annoyed by the presence of the token female assassin(s), who were so obviously written by males. But piercing through my angry cloud of annoyance like forked cracks of lighting is the sound of Dennis Quaid drawling through the trite dialogue in the Audible version. It was awful. Just so bad.

So why did I finish? Well, I had a morbid fascination with how it would turn out. Since it's probably true that most people who pick up this book share my morbidity (let's face it, I did suspect I'd be disappointed by this), we may as well get the full caricatured, clichéd, served-with-a-large-amount-of-cheese experience.

I'm not going to tell you to avoid it. I'll just tell those of you who do read it after this warning to buy me a beer and let our eyes meet over the foam. I'll know. I'll commiserate with you.