In this masterful debut that starts off as a mystery and becomes much more, Tora  Hamilton is an outsider at her new home on the rocky, wind-swept Shetland Islands....Digging in the peat on their new property, Tora unearths a human body, at first glance a centuries-old bog body, interesting but not uncommon. But realizing that the body is in fact much newer, that the woman’s heart has been cut out and that she was killed within a few days of bearing a child, Tora, herself an obstetrician, becomes obsessed with finding out what happened to her—even when the police, her colleagues and eventually her husband warn her against getting involved. 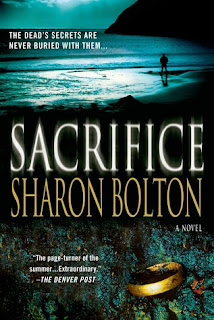 I read Little Black Lies by Sharon Bolton last year, and I loved it. I was wondering whether her earlier stories were as good as the latest. The answer? Probably not, but then again, Little Black Lies was one of my best reads last year - that takes some beating.

What I liked most about Sacrifice was the strong female characters. There seemed to be an abundance of them. Or maybe it's the dearth of them in other crime novels that makes this one stand out. Also they weren't contrived, and neither did the males have to appear overly weak in order to make the fairer sex seem stronger. They were just gutsy, all by themselves.

This is a long story. Arguably a little heavy-handed on the details. Yet I am glad to report that the plotting is brilliant, the character development great, and the gripping intensity amazing. I cannot believe that this was a debut novel. There is no shortage of action and drama, and the spellbinding conclusion will have you sitting on the edge of your seat. And lucky for me, there are about 5 books in the Lacey Flint series to get stuck into. Yay.

An enthralling and satisfying book.

You may also enjoy Blacklands by Belinda Bauer, or Black-eyed Susans by Julia Heaberlin