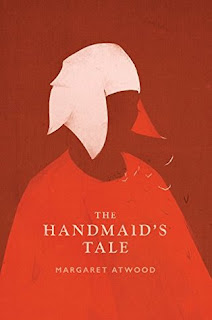 Margaret Atwood wrote The Handmaid’s Tale in 1984, the year (and title) of George Orwell’s futuristic runaway success, which he’d written in 1949. Think about how brave that was of her, for a minute.

Yet, that didn't seem to be enough of a literary hurdle to clear. Unlike 1984 with all its gadgets, slogans and Newspeak, Atwood did not use anything in her novel that had not yet been invented or discovered, or had not actually happened yet in history. Setting herself up for failure much? As a woman?

But Atwood so didn't fail here. The genius of this glorious, tragic beautiful story is its simplicity. The handmaid - Offred (all the handmaids were given their “master’s” names - Ofglen, Ofwilliam, etc), is assigned to a Commander, who is married to Serena Joy, a previous televangelist. They live in the Republic of Gilead, a totalitarian theocracy, where men have wives, careers, lives and possessions, and women are destined to be non-childbearing wives, handmaids or Marthas (servants). That’s if they’re not banished to colonies. Apart from the rather obvious observation that it takes at least three women to do the “work” of a wife, mother and housekeeper (usually one person), the commentary on feminism struck a deep resounding groan at the core of my soul. 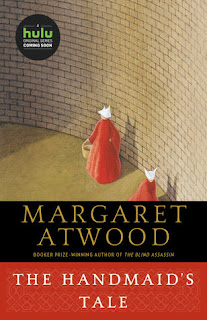 And you don't have to worry about explanations about weird inventions, or fabulous concepts. Because of the constraint, nothing is unfamiliar. The environment is real. This is speculative fiction, not Sci-fi. And despite that, it’s more harrowing, and even scarier.

This book will stay with me for a very long time. Apart from the fact that I have to resist the urge to Google the crap out of Gilead (it doesn't exist, Bev, it’s just a story), there’s the whole “How much of this permeates the whole of our society today?” question. As well as the “What are we doing about it?” follow up. And too, “How do I get all of Atwood’s other books and read them? Now.”

The work of thinkers and writers like Margaret Atwood should be preserved, prescribed reading and this one, a cautionary tale. Only I fear it’s too late.

The audible narration (by Claire Danes) is superb, as is the dramatisation of the end. And the author’s own comments (written in 2016, and narrated by Maragret Atwood herself) make this the best Audible Book. Ever.

Read it soon, before you watch the TV series. 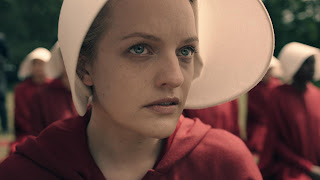 You may also enjoy 1984, by George Orwell, or The Wonder by Emma Donoghue.