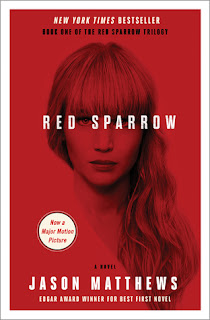 I'm glad the cover has that picture on it, because I can't read this without thinking of the movie - even though I have only seen the trailer. If you've been living under a rock, and don't know what I'm talking about, here's the blurb.

"In contemporary Russia, state intelligence officer Dominika Egorova has been drafted to become a “Sparrow”—a spy trained in the art of seduction to elicit information from their marks. She’s been assigned to Nathaniel Nash, a CIA officer who handles the organization’s most sensitive penetration of Russian intelligence. The two young intelligence officers, trained in their respective spy schools, collide in a charged atmosphere of tradecraft, deception, and inevitably, a forbidden spiral of carnal attraction that threatens their careers and the security of America’s valuable mole in Moscow."

I picked this up with a sigh. Another spy novel. And a movie I don't particularly want to see. Yet this one pleasantly surprised me. I enjoyed the reading, even though it was a little long-winded in places. It didn't take me long, as I became entranced with the story, Dominika, Nate, Russia, the CIA. It was all good. I'll read the next one.
ISBN:9781501171574

So glad I read your review. I'm not big into spies, and from the film description, when they saw she uses her body, yeah, I lose interest.... I might give the book a shot, but still don't know about the film. Maybe the film won't be as long-winded... lol.