Every Note Played by Lisa Genova

Richard is arrogant, opinionated, selfish and the type of person nobody should marry. He's also a successful concert pianist - playing all the great venues and classical gigs across the world. No mean feat. He met and fell in love with Karina in college, and she with him, and they have a daughter, Grace. In typical fashion of the times, Karina - the more talented according to all their professors -  sacrificed her potential future, her playing, everything. She taught a few students to keep busy, and also kept flexible for the sake of Richard's career. They're now divorced, Grace is in college and he's moved on, Karina not so much. Until he gets ALS. The ice-bucket disease. 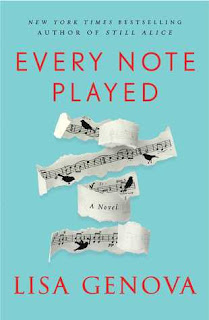 "An accomplished concert pianist, Richard received standing ovations from audiences all over the world in awe of his rare combination of emotional resonance and flawless technique. Every finger of his hands was a finely calibrated instrument, dancing across the keys and striking each note with exacting precision. That was eight months ago.

Richard now has ALS, and his entire right arm is paralyzed. His fingers are impotent, still, devoid of possibility. The loss of his hand feels like a death, a loss of true love, a divorce—his divorce.

He knows his left arm will go next."

And that's the BLURB, people.

We all know Lisa Genova can write about facing down horrific diseases as if she had experienced them herself - if we haven't read Still Alice, we've seen the movie. But this book was outstanding not only for that aspect, and for all the musical references, which I loved, and couldn't get enough of. It was the personalities. Richard didn't suddenly become someone he hadn't been, just because he was now ill. It was interesting contrasting his unwilling sacrifices with Karina's, and seeing this horrid, awful disease change both of their lives. We also meet Bill, the humorous and gay carer, who is angelic and naughty as hell, and a complete delight.

And in the blubbering, soggy, heart-wrenching mess that I became at the end of this book, I realised I'd learned -not only about devastating ALS, but also about relationships, forgiveness, love and mercy. Because no one deserves ALS, or to love someone who gets it.

You may also enjoy Still Alice by Lisa Genova or The Things We Keep by Sally Hepworth.