This was a man by Jeffrey Archer

The final instalment in The Clifton Chronicles.

Here is a book. This was a man. 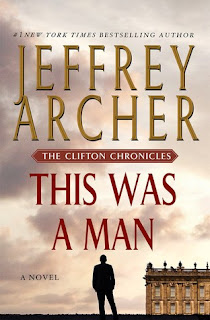 This was a series. Jeffrey Archer started the story of Harry Clifton in Only Time Will Tell. We thought three books. We were told five. A whopping seven later, we are done. And mixed feelings about it.

Jeffrey Archer is master of the cliff hanger - every single book ended on a massive event/shock/revelation that had us all gasping for about a year until the next book was released. Now that they're all out there, you can binge read, if you haven't had the privilege. Lucky you.

Not only the book endings were like that - the chapters too ended with you thinking "just one more". You'll enjoy Harry, his mother Maisie, Emma, her father Hugo and brother Giles, the evil Virginia, and many friends and relatives along the way. There is plenty of action, dialogue and the ever changing point of view keeps the plot moving and us guessing.

It's a bit like a TV drama, really. Lots of intrigue, suspense, bad guys getting the upper hand, then good and noble triumphing eventually.  This last book in the series showcases Harry creating his magnum opus,  and we look back at his eventful life, the story of which started in 1920. Children and grandchildren provide more drama and poignant moments.

You'll laugh out loud, you may shed a tear or two, you'll be very entertained and the plot will enthral you. Not much will change you or make you think, though. If you've relished the other books in the series, you'll love this one, the tried and tested formula is applied well, and it's the last one.

So it's with a lot of joy, fondness and vivid memories that we wave goodbye to the Clifton Clan. Sad and glad it's over.

Here's my review of number six - Cometh the Hour