Everybody Lies by Seth Stephens- Davidowitz

Big Data, New Data, and What the Internet Can Tell Us About Who We Really Are - that's a really annoying subtitle, isn't it? Because if you're anything like me, you probably try not to reveal everything about yourself - certainly not who you really are - on the internet. But have you ever done a Google search? Ever worried that the search will reveal more about you than your Facebook profile picture? You should have.

"Everybody Lies offers fascinating, surprising, and sometimes laugh-out-loud insights into everything from economics to ethics to sports to race to sex, gender and more, all drawn from the world of big data. What percentage of white voters didn’t vote for Barack Obama because he’s black? Does where you go to school affect how successful you are in life? Do parents secretly favor boy children over girls? Do violent films affect the crime rate? Can you beat the stock market? How regularly do we lie about our sex lives and who’s more self-conscious about sex, men or women?"
It's not only about Google. There are countless data sources - more found everyday, that can be trawled by powerful algorithms, interrogated without fear or favour to reveal interesting patterns and observations about human behaviour and what causes it.

Here are some quotes. 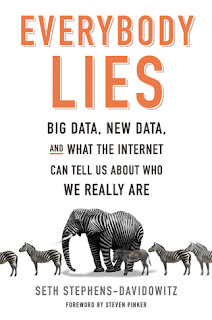 “People frequently lie—to themselves and to others. In 2008, Americans told surveys that they no longer cared about race. Eight years later, they elected as president Donald J. Trump, a man who retweeted a false claim that black people are responsible for the majority of murders of white Americans, defended his supporters for roughing up a Black Lives Matters protester at one of his rallies, and hesitated in repudiating support from a former leader of the Ku Klux Klan. The same hidden racism that hurt Barack Obama helped Donald Trump.”
“Netflix learned a similar lesson early on in its life cycle: don’t trust what people tell you; trust what they do.”
“Many people underreport embarrassing behaviors and thoughts on surveys. They want to look good, even though most surveys are anonymous. This is called social desirability bias.”
“Big Data allows us to finally see what people really want and really do, not what they say they want and say they do. Providing honest data is the second power of Big Data.”
“Terms used in loan applications by people most likely to default :- 'God', 'promise', 'will pay', 'thank you', 'hospital' " ”.

An accessible and entertaining view of life as we don't know it yet.

You may also enjoy Irresistible by Adam Alter.