Once we were brothers by Ronald H Balson 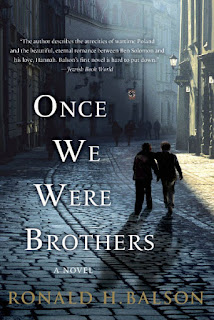 “Once We Were Brothers is Ronald H. Balson's compelling tale of two boys and a family who struggle to survive in war-torn Poland, and a young love that struggles to endure the unspeakable cruelty of the Holocaust. Two lives, two worlds, and sixty years converge in an explosive race to redemption that makes for a moving and powerful tale of love, survival, and ultimately the triumph of the human spirit.”

The story starts with Ben, now 83, publically accusing Elliot Rosenzweig, a wealthy patron of arts and culture of being a former SS Officer. Through some friendships and connections, he engages Catherine Lockhart to prepare a lawsuit, and starts to tell her his story.

There are so many stories about the Holocaust, set in so many European countries, from many points of view. This is a good one, but it’s not better, or better told than one we have heard before. There are many flaws, and I suspect a number of readers would pick up on these, and judge the book by them.

But I really enjoyed it. I know that Catherine seems naïve, and that it is unlikely that she would have spent weeks listening to Ben, all those hours unbillable. I kept reading though. It got better and better. And by the last 100 pages I couldn’t put it down.

The legal drama was much better told than the back story, and on the whole, the characters were pretty good – enough showing and not too much telling. I will read more from this author


You may also enjoy Saving Sophie by the same author, or Kit by Marina Fiorato, Two Brothers by Ben Elton or The Nightingale by Kristin Hannah

That sounds like a really interesting read! I think I'll have to try it. Great review!

Thanks Ally. Will visit your blog soon, looks interesting.