The Insect Farm by Stuart Prebble 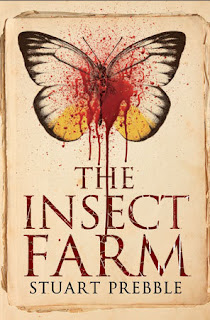 Jonathan and Roger Maguire are brothers. They lead fairly normal lives, with Roger, the elder, being mentally challenged.

Roger builds an insect farm. He purchases varieties of insects, and observes their behaviour. Jonathan, our narrator, attends an out of town university, together with his girlfriend Harriet. The boys are obsessed, Roger with his insect farm, and Jonathan with beautiful flautist Harriet.

Described as a psychological thriller, the pace of this is somewhat gentle. More eerie than terrifying, and more lurking evil than in-your-face axe murderer. I found that made it all the more disturbing.

The plot unfolds cleverly to a satisfying conclusion, and you will want to reread the prologue, as I did.

A taut, well-written debut, I couldn't put it down.