The Woman He Loved Before by Dorothy Koomson 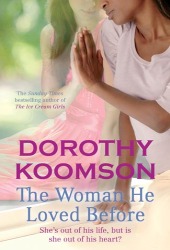 Libby and Jack are married and live in a beautiful home near the sea. They have a horrific accident, where Libby needs to be cut from the car, and is far more injured than Jack. That's when she realizes that other people - the police investigator in particular - think there's more to their story than meets the eye. Jack is a widower. His previously perfect wife, Eve, died before Libby met him. When Libby comes home to start to recover, she finds Eve's diaries, hidden mysteriously away and starts to read them.

Told in Libby's and Eve's voices, this is an intriguing tale of marital bliss and marital angst. If you're asking the question - 'is my husband capable of offing me?', can you really trust him? But what if he isn't? And even if he isn't, do you still dare to live in the same house? The scene is set for a detection with extremely high emotional stakes, and I found I couldn't read quickly enough

This one's great too, I'm going to hunt everything by Dorothy Koomson down.

You may also enjoy My Husband's Wife by Jane Corry or The Precious One by Marisa de Los Santos.