I’m a sucker for a new diet, or book on nutrition. And when I saw that this one was written by a doctor - a cardiac surgeon, mind you - I was impressed. 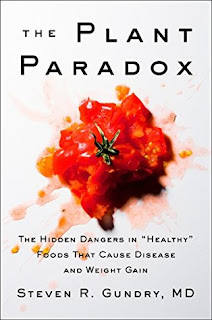 Steven R.Gundry, MD unpacks The Plant Paradox, which in one line is that although plants are generally good for us, it’s the lectins produced by some plants that are, if not killing us, causing all our health problems - from asthma through heart-disease and obesity and even renal failure.

And then I read the book, and it sounded great - it’d work for me, especially with my health issues. I became more and more convinced that because of all the success stories, scientific explanations, and recipes at the back (yes, really - I know I’m strange, you don't have to tell me that) this was my long-searched-for answer. The eating plan that would work. For me.

I should have realised, I should have known. When I was trying to explain this new diet to my family and I found myself saying “I’m not explaining it that well, but the book does” and “I don't understand the science, but it makes sense.”

Why didn't I apply one of my life mottos - “Don’t trust what you can’t understand”?

Lucky for me, I did read some reviews, like T.Colin Campbell, and this one and a video over here. They all pointed out the obvious - a lot of the citations and quotations didn't make the points that the author was making, in fact they were saying the opposite, and that the peer reviewed papers were sometimes adverts in journals. Not that trust-inspiring, if you ask me. And now I must believe all that anecdotal ‘evidence’ too? Yeah right.

In retrospect, there were so many warning signs that I should have picked up on immediately…


In my defence, I haven't spent more than time on this one - I found it in the library, and it’ll be returned this week, so not that much harm done. Except, I still really really want to try the diet at the back of the book, to see if it works for me. EVEN THOUGH I KNOW THE BOOK IS RUBBISH. I want to be one of the people that said - “I tried it and felt so healthy and strong”.

What’s wrong with me?

Is there a book for that?