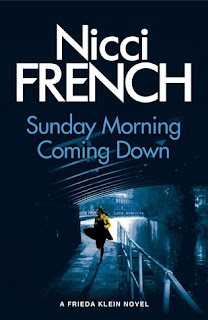 The writing team of Sean French and Nicci Gerrard showcase psychotherapist Frieda Klein in her seventh book. I've read one or two of the earlier ones, but it doesn't really matter if you haven't, you can read this as a standalone.

In the midst of a storm, DCI Karlsson is hauled out of his warm snug Sunday evening to investigate a crime at Frieda's home - her refuge, and the place in which her nemesis, Dean Reeve would like her at her most unsettled, or even petrified. A smell has revealed a body under the floorboards, and now the place is crawling with detectives, forensics, and others, the press cordoned off outside, with all eyes on Frieda. You can imagine she's charmed.

She knows it's Dean's calling card, but everyone else believes Mr. Reeve to be dead. When her friends, family and loved ones feature as part of his plans, she has no choice but to play his game. He's kind of got her. Set in the shadows of London, he could be lurking in alleys, hiding behind dusty windows or floating down the Thames.

This is fast paced, after a slowish start, and the stakes gradually get higher. Some twists and turns take us to a tense and fascinating ending,  setting up the next book, which is the last in the series, apparently.

I enjoyed Sunday Morning Coming Down, and it's perfect to escape over a weekend into.

You may also enjoy The Secrets She Keeps by Michael Robotham or Karin Slaughter's The Good Daughter, or what about Here and Gone by Haylen Beck?

I have dipped in and out of this series a couple of times over the years and enjoyed the books, so it is good to know that they continue to be readable as stand alone stories.

I do enjoy it when an author builds strong characters, but it can work against me when I can't keep up with every book in a series, there are just so many good ones out there!