The Kind Worth Killing by Peter Swanson 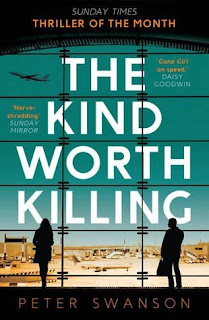 Ever wanted to kill your spouse? Go on, be honest. No one can hear.


Ted Severson's flight is delayed. After one too many martinis enjoyed in the company of a beautiful stranger, they play a version of truth or dare and he reveals that he thinks his wife Miranda is cheating on him. Killing her is a theory, hastily spoken words of anger, until Lily calmly offers to help.


Implausible? Not really. Gripping, twisty, shocking and unputdownable? You bet.

There was a part - nearly halfway into the book - where I was completely convinced I had the whole thing totally figured out. Then something happened which revealed I was utterly wrong.

I read this book at a furious pace. More plot driven than character driven (most of the people aren't that nice), you will want to stay up late reading to discover how this all pans out.

A tiny bit of hanging in the ending. Still satisfying, but one or two questions, which wasn't the end of the world.

I will be looking out for more by Peter Swanson.