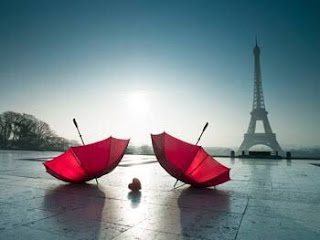 I looked into the clear gaze of the teen sitting opposite me, her pale blue eyes defying me to argue with her as she ranted about the genocide in Rwanda (studying for history has got her stoked). Her outrage was contagious later as she told me a story of a family who sold a daughter and used the money to buy a son a car. We were in despair together for the future of mankind, in a world where human rights as ancient as the beginning of time as we know it are violated daily, blatantly, and the violations ignored by most.

And then later that day, Pray for Paris started trending on my timeline, everywhere. And of course I am – praying for Paris. But I hesitated before I changed my status to what Facebook suggested. It wasn’t just because I have an innate stubbornness to not follow what others suggest. I had a sense that there is more to this than “Pray” or “Paris”. 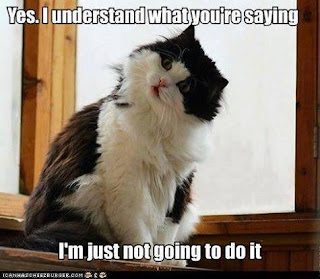 I am devastated that I live in a world where anyone thinks it is okay to take human life, for any cause, at any time. I cringe when I hear the calls for the US to “take the terrorists out – let’s show them what we can do.” Because for every life lost, whatever the reason, there are those left behind, weeping.

I am a Christian. I believe in the power of prayer. I also believe that when we pray, we should do so with understanding, love and respect for all cultures, races, and people groups. And also with the deepest humility that “but for the grace of God, there go I”. The conversation with my teen also included a discussion about what it meant to identify with those who suffered, how it wasn’t enough to say “It wasn’t me”, but a more helpful “I acknowledge your pain and suffering, and I’m sorry that we as humanity have let you down. It wasn’t right, and I stand with you.”

Because we need to identify, not just with Parisians, but also with the Syrians, those in Lebanon and Israel and who all are suffering on a daily basis. And when we pray, it isn’t for Paris, it’s for Parisians, Syrians, people of all nations everywhere, especially the scattered, the dispossessed, the downtrodden and the oppressed. 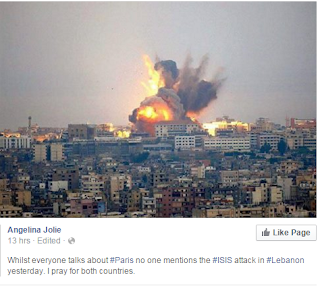 I was saddened to see the post of the picture that thanked everyone for their prayers, but please, no more religion, just life. 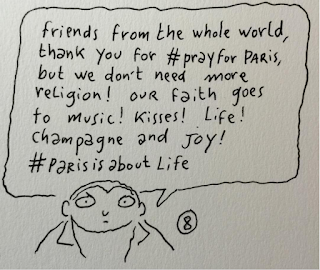 I understand the sentiment – the cartoonist believes that deep-seated fundamental religion driving people to irrational behavior that has led to Paris being in lockdown – and he doesn’t need any more of that.

I also pondered on that verse that says “when you pray, don’t be like the hypocrites who stand on a street corner or in the synagogues and pray, they have their reward in full. When you pray, go into your room, close the door and pray in secret.” Is Facebook the equivalent of the street corner these days? And is #PrayforParis helpful? I know it raises awareness, and that is good, but does it say enough?

We do need to pray – not just for Paris, but for all nations. And we need to do so with a deep sense of sadness and repentance, not judgement. We need to ask forgiveness for our uncaring attitude when it comes to human suffering – that we haven’t already been praying daily for all nations where there is violence and injustice.

“Thus says the Lord of hosts, Render true judgments, show kindness and mercy to one another, do not oppress the widow, the fatherless, the sojourner, or the poor, and let none of you devise evil against another in your heart.” Zachariah 7:9-10

We need to pray that there will not be retaliation after retaliation, but restoration, justice, peace and a place for those who have lost, to find healing and relief. We should be praying for an end to terrorism, and to the evil that on both sides leads to the inhumane conclusion that it is all right to take human life for a cause – whether that cause be for IS or any religion anywhere. 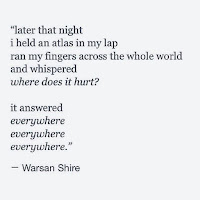 This is not a time when we should be polarizing, pointing fingers and stirring up hatred. I know it sounds trite to say we should make a difference where we can. I live too far away to take in a refugee. But in my country I can do my bit to help those less fortunate than me. Not to make myself feel better, but to let them know that I do not think that poverty, injustice and oppression is right, and I value their life, their humanity, and their right to live in my world. Because, I believe, although it sounds like a weak and silly response, it is far better than “hunt them down and kill them.” 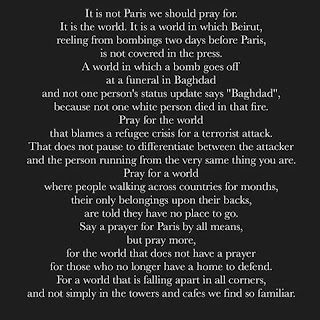 I have no religion, but I agree with this post 100%. Encouraging all the 'clicktivists' to share this on Facebook stirs up racial hatred and a frenzy of approval for more violence, as indeed it is meant to, I am sure (it gives the US and UK an excuse to declare war, with the people's approval). I believe Facebook is used by governments to influence society, even more than most realise. Alas, it works, because within that half hour when people feel outraged (outrage which soon disappears when something else catches their eye), they will have reposted whatever it was, and instilled that little bit of hate, conscious or subconscious, in the minds of many. I'm going to post this on Facebook, Bev.

Thank you Terry, I really appreciate it. I was going to go into the "who is behind this?" but I would have been speculating. My thoughts were running in the same direction as yours, however. Enjoy the rest of the weekend.