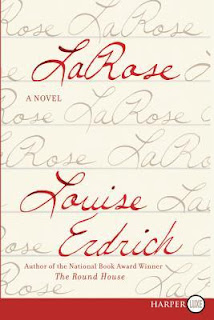 Landreaux Iron lives in North Dakota with his family, alongside the Ravich property. It's 1999. One day, while stalking a deer, he shoots, and sees it run away. He gets closer and discovers the dead body of Dusty, his neighbour's son. Worse, Dusty was best friend to his five-year old son, LaRose. His wife, Emmaline, is half-sister to Peter Ravich's wife, Nola. The families share everything, from lifts to town to sleepovers and meals. And now they must confront this dramatic death. Part of Landreaux's way of dealing with this horror is to make retribution - they'll give LaRose to the Raviches.

But what makes up for the loss of a child? And how do you find your way through such desperate grief? And what about LaRose? It wasn't his fault.

The issues are unpacked in this book that has been called a literary masterwork.

It's heavy-going. Not just the subject material. I found the story-telling difficult to follow - the voices, the timelines were complex and intricate.

Yet worthwhile in the resolution. A warm and beautiful tale.

You may also enjoy At the Edge of the Orchard by Tracy Chevalier or Americanah by Chimamanda Ngozi Adichie. Or try Jodi Picoult's Small Great Things for something lighter.