The Feathered Bone by Julie Cantrell 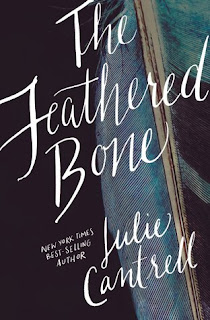 As a mother, what is my worst nightmare? What if my best friend’s teenage daughter goes missing? On my watch.

It would be better if my daughter had gone.

What am I saying?

This is how Julie Cantrell’s novel begins, in pre-Katrina New Orleans. It considers the effect of disasters on our friendships and family relationships.

Cleverly titled, I was drawn into the drama as the story unfolded. The characters were nicely established.

Because it was observed through the eyes of Amanda, the mother responsible, in the first person, and Sarah, the missing girl, by way of a sort of journal, a lovely intimacy was developed. The revealing of the reasoning behind the book’s title was quite laboured and a little clumsy, I thought.

I really enjoyed the setting. There was plenty of action, and enough conflict to interest me. However, I felt that perhaps there was too much going on for a well rounded unfolding of the fullness of the characters, leading to a perception of shallowness in some of them. Some trite dialogue, only just short of preachiness, added to the problems I had with the way the tale was told. But maybe I am not used to this genre - I have a long list of somewhat darker novels on my “read” shelf. Perhaps another edit of the length of the novel, would have enabled more focus to be given to the significance of all that took place - the book did cover so many events, that it made it difficult to capture the enormity of the impact of each of them. The message was strong and clear, powerful and brave. There were some interesting twists and turns, albeit with a sprinkle of cheesiness and sugar coating too.

With thanks to Netgalley and the publishers for an advance review copy.

You may also enjoy A Casualty of Grace by Lisa Brown.