There was so much about this book that appealed to me. Firstly, the author - Rebecca Todd Peters, is a Presbyterian minister and social ethicist, and I reasoned she would be a person I could relate to on this subject matter. Secondly, the title - it seems to me that a lot of the people we listen to about abortion have more testosterone than estrogen. And thirdly, the context - I'd just finished Jodi Picoult's "A Spark of Light" and was feeling the need (also given the current debate in the US and across the globe) for something more factual. 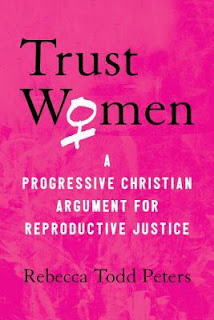 Here's the premise : "Roughly one-third of US women will have an abortion by age forty-five, and fifty to sixty percent of the women who have abortions were using birth control during the month they got pregnant. Yet women who have abortions are routinely shamed and judged, and safe and affordable access to abortion is under relentless assault, with the most devastating impact on poor women and women of colour." The author goes on to argue that "... this shaming and judging reflects deep, often unspoken patriarchal and racist assumptions about women and women's sexual activity. These assumptions are at the heart of what she calls the justification framework, which governs our public debate about abortion, and disrupts our ability to have authentic public discussions about the health and well-being of women and their families."

What I didn't bargain for was the personal stories that were shared - which were deeply insightful and impactful; her views, which presumably in her world are more than a little controversial, and her courage in sharing not only her stories, but her journey, which was helpful in terms of conversations to have around this important topic.

What I was left with was the conviction that however you view this issue, stealing agency from the people most affected by these laws and arguments - the pregnant women, is morally wrong and there is no good reason to do so. The fact that this disenfranchised group have been treated so poorly by society - especially when there is a sperm that has 'triggered' the pregnancy, the source of which has long moved on and very seldom bears any consequences makes the imposition of judgement and "rules", when each situation is deeply personal and profoundly different, at best silly, and at worst, heaping coals upon pain and struggle.

Sometimes the text  was very repetitive,  but the facts, figures and observations were challenging and persuasive.